The Canadian Food Experience Project began June 7 2013. As we (participants) share our collective stories across the vastness of our Canadian landscape through our regional food experiences, we hope to bring global clarity to our Canadian culinary identity through the cadence of our concerted Canadian voice. Please join us. 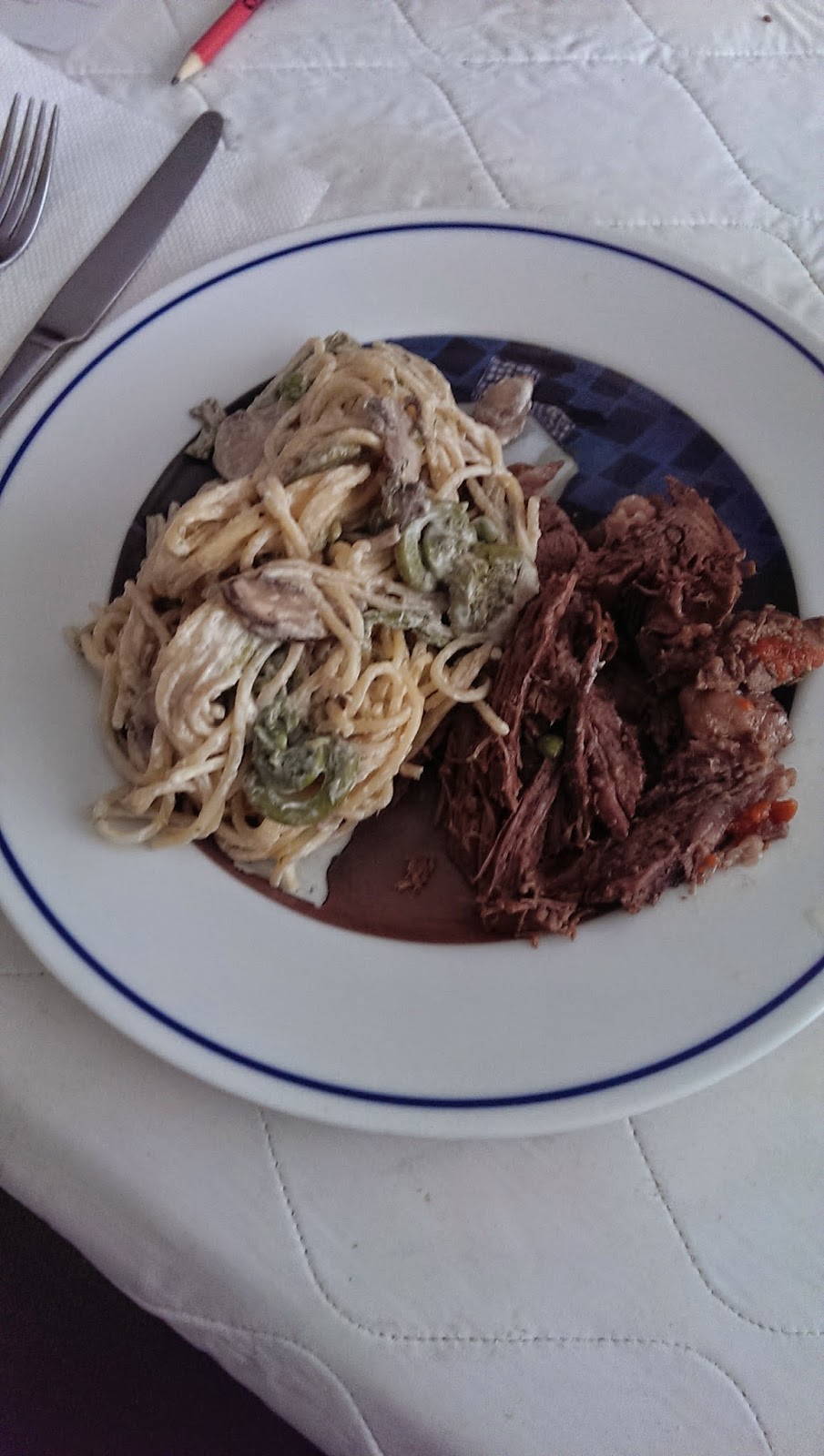 Exactly one year ago, I was up early one Saturday morning, editing a piece that I was going to read aloud at an open mic night. In spite of all of the Hemingway stereotypes, writers long to be distracted from the page. I found myself drawn to a tweet from Canadian culinary superstar and huge supporter of my late husband, Lucy Waverman, promoting The Canadian Food Experience Project by our dear Valerie Lugonja. Valerie was asking food bloggers (one of whom I had recently become) to participate in a 13-month project to express our love for, and share our experiences about, Canadian food.

When I signed up a year ago, I wasn’t sure if I would fit in. After all, many of the others had been writing and styling their blogs for longer than I had. I hoped my enthusiasm would show through, and people would be interested in reading about my unique perspective as a first-generation Canadian.

So first off, thank you all so much for taking the time to read my blogs for the past year. You have encouraged me to continue past the last day of this project. I hope to write a food blog entry for you at least once a month to be uploaded on or around the 7th.

But this month’s entry is entitled “My Canadian Voice”. So what makes my perspective more interesting and distinct from others? My parents came here during the great influx of the 60s, during the conception of multiculturalism in Canada. Canadian cities are distinct from other major world cities for that very reason alone.  We were doing fusion cuisine in Canada long before the rest of the world caught on - my mother would take ingredients that were uniquely Canadian and adapt her recipes from home to suit what could be found locally. “Authentic” dishes made with the correct ingredients from her country no longer taste right to me, because my versions are Canadianized.

And given my background and upbringing, who would have thought that I would even be interested in making an almost-perfect schmoo cake, looking for the perfect butter tart (without raisins, ugh) and extolling the virtues of red fife flour.

I love this country, and everything it stands for, no matter who happens to be in parliament at any governmental level. Food brings us together, and Canadians staunchly defend our dishes of national pride, such as poutine and peameal bacon. Our problem is that, unfortunately, we’re really not aware of a lot of our regional dishes. For instance, Valerie had never heard of a schmoo cake. And before I had gone to Winnipeg and had it on a special trip, I didn’t know either. Through this project we have learned a lot more about each other and our regional treasures, and in so doing, have developed our Canadian culinary pride. 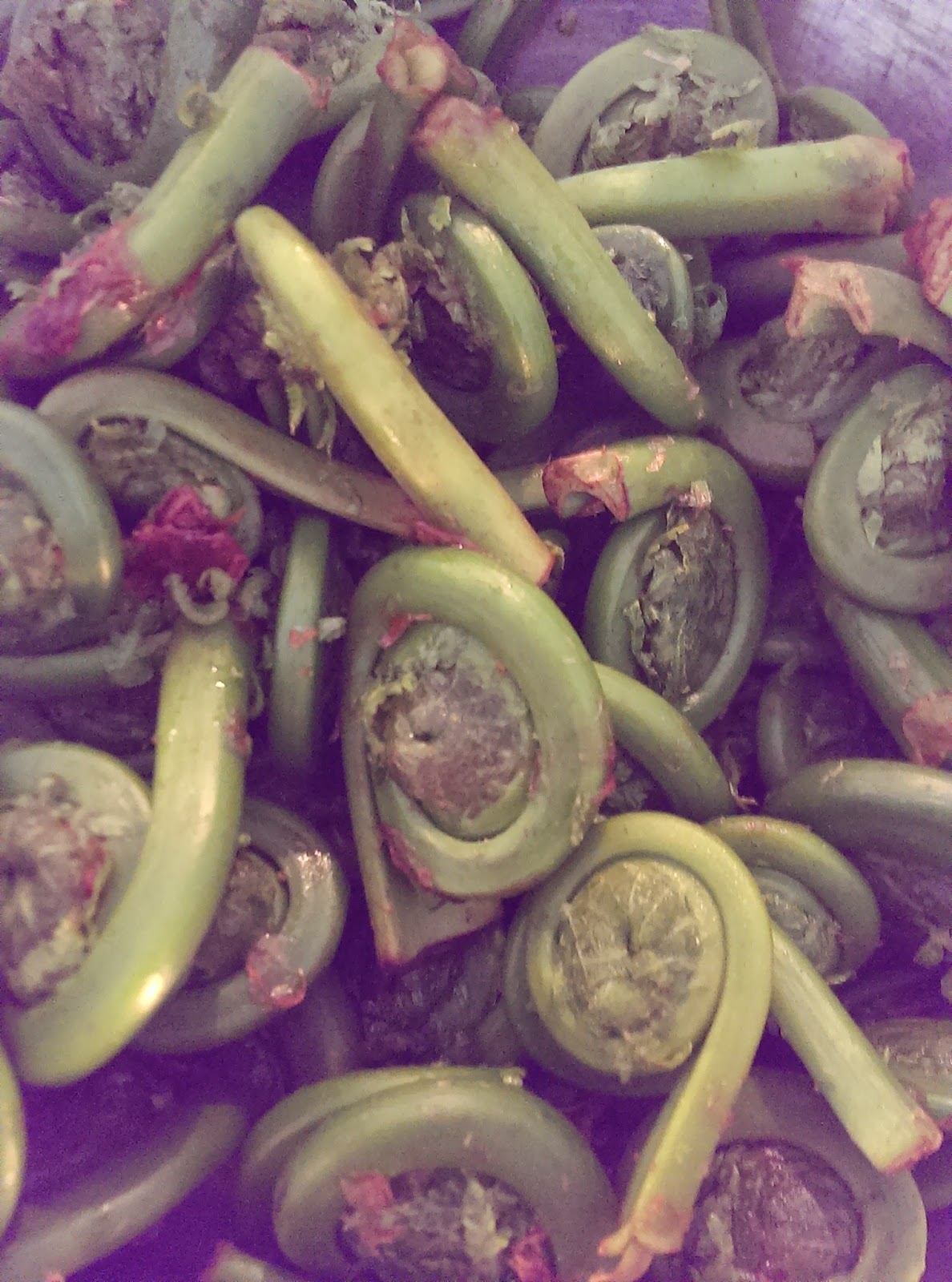 So for my final recipe for the Canadian Food Experience Project, I have to talk about something that separates the foodies from the hipsters – fiddleheads. You either salivated or shirked at the mention of the word, if you know your mettle. Fiddleheads are also grown in the northern US, but then again, they also attempt to make maple syrup in Vermont. Any good Canadian knows the best fiddleheads are from the East Coast, growing wild in the forests. We have fiddlehead farms in Ontario, and yes, they are adequate, but nothing is as pungent or as robustly green as East Coast fiddleheads.

Where my parents are from, they have many bitter green vegetables, and I suppose my love of fiddleheads comes from those roots. And as usual with something Canadian, there are crazy rules that go along with the preparation of fiddleheads. The Canada Food Guide suggests you cook fiddleheads for at least 10 minutes before you actually cook them, to avoid being poisoned. The Canada Food Guide also recommends that all burgers be cooked beyond recognition before serving them. And we food people understand why they have to say these things. The last thing you want is some person becoming sick, or worse, because they wanted to try something new.

So, in keeping with the guidelines, I will recommend that you please boil your fiddleheads for 10 minutes before you cook them in your recipe. But I won’t come to your kitchen and enforce the rules.

One thing you do have to make sure is that they are washed properly. No brown leaves, no leaf rot. Fill a big bowl with water, throw the fiddleheads in, and wash each individual fiddlehead until all the brown leaves are gone. Then dump the water, refill the bowl, and do it again. And then, dump the water, fill the bowl, and wash the fiddleheads for a third time. After the third draining they are ready to be used.

Fiddleheads are as diverse as asparagus or broccoli or any other green veggie. Lucy Waverman herself recommends coating them in olive oil, salt, and pepper, and roasting them on a parchment-covered cookie sheet at 400F until they are crispy and you can eat them like fries. But here, I made a kid-friendly fiddlehead creamy pasta. It’s fairly easy, and it’s pretty, tasty, and you can get your kid who runs from green vegetables to finish his fiddleheads!

Fiddlehead Primavera
(serves 4 – 6)
1 – 1 ½ lbs of fresh fiddleheads (I have never used frozen, but since the season is over, you might have to look for those), washed well.
½ lb fresh mushrooms (I used creminis), sliced
1 medium onion, diced
2 – 3 large cloves of garlic, diced
1 cup frozen peas (optional)
1/4 cup butter
1 Tbsp olive oil (can be regular, it doesn’t need to be EVOO)
1/3 cup milk and 2/3 cup whipping cream (or, if you are worried about fat, then have 1 Tbsp flour or tapioca at the ready with an additional 1 Tbsp butter)
Thyme, rosemary, oregano
Salt and pepper
500g of pasta made from durum semolina (spaghettini is the favourite in our household)
Grated parmesan cheese (you could use parmigiano-reggiano, but parmesan is made in Canada)

Once the fiddleheads have been washed according to the directions above, steam them for about 7 minutes until their colour just starts to turn. In the interim, melt about 2 Tbsp butter and the olive oil in a skillet over medium-high heat. Once the butter stops foaming, add the mushrooms and coat them well in the butter and oil. Lower the stove to medium. The pan should dry out and your mushrooms may appear to be scorching. Just keep stirring them or making them jump and in about 2 – 3 minutes, the mushrooms will start to soften and release liquid. Once the mushrooms are done to your liking, set them aside. The fiddleheads should be finished by now; remove the steamer from overtop of the water but do not immerse the fiddleheads to halt the cooking.

In a large pan, melt the rest of the butter, and, once again, after it has stopped foaming, add the onion and saute until tender. Add the garlic at this point; toss with the onions just until the garlic releases its fragrance. Add the mushrooms, then add the fiddleheads. Toss until everything is well-coated. Add the peas at this point, but if you are using frozen peas, rinse them under tepid water and drain before adding them. Once all the veggies are heated and coated well, (if you are making a roux, add the flour and butter into the pan, and coat everything well) add the milks and stir until your sauce is at its desired thickness.

Meanwhile, prepare your pasta according to the package directions and your preference. My son prefers things a little more than al dente. Once the pasta has been drained, and your sauce is at the desired thickness, add the pasta into the pan, along with the fresh herbs you want to use, and toss it with the sauce. While you let the sauce thicken again, since it will become loose, add a handful of grated parmesan to speed up the thickening process. Add pepper and taste to see if you still need to add salt (the cheese can be pretty salty). Season to taste.

Yes, this is a very simple recipe. But that’s what has been great about this whole experience. We are all simple Canadians, brought together through our love for our unique food. Hope you continue with your Canadian culinary adventures as much as I do with mine!
Posted by Mimi at 11:17 AM