I live in the South West end of Durham Region in the town of Ajax, Ontario. The most famous buildings in our area are the Pickering and Darlington Nuclear Plants. Some of you may even be old enough to remember the outcry by the public of the construction of both of these plants because of the potential impact they would have on the surrounding environment.

For you see, Durham Region is part of the Ontario Green Belt. And when the plants were first activated, everyone thought the nuclear plants would destroy the farmers’ fields with their hazardous waste and other environmental impact.

What destroyed the farmers’ fields wasn’t so much the nuclear waste but the population explosion in Durham region caused by the success of the nuclear industry. More jobs meant more people. More people meant more houses. And so, developers offered farmers ridiculous amounts of money for their land at a time when they needed it most, and in the place of crops rose row houses upon row houses, subdivision after subdivision.

The developments haven’t stopped. People are choosing to leave the static metropolis of Toronto and move further east. Ajax is growing in population because we have more dormant land for developers to use for more houses and more shopping centres. More shopping centres mean more food stores. When I say “food stores”, I don’t mean just grocery stores (which is where food lives and where it dies – have you ever seen a frozen thin crust pizza in a box? That to me defines the death of food.). I also mean fast-food and/or chain restaurants where the meals are cookie-cutter, boil-in-bag or frozen-to-flat grill, and the only flavour you can be guaranteed to taste is salt.

Unfortunately, most of the people who move out to the suburbs, or to this part of South Durham, love to frequent these harbingers of food death. Why else would we have 15 different wing chains within a 4 km radius?

But all is not lost out here. In spite of the amount of sodium dealers residing in the monolithic shopping plazas, we have a few local food heroes who are doing their best to ensure the people of Southwest Durham have the freshest, healthiest, most nutritious produce in Ontario. 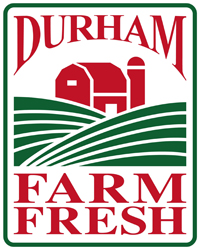 One of these local farms is Stroud Farms. Their main store is located on the Whitby/Ajax border, surrounded by pear and apple orchards. Stroud Farms also owns several other acres of farm land in the boundary of the Town of Ajax, growing corn, raspberries, beets, and other root and tuber vegetables. Their main store is open from July to November, and in the fall, they have the largest selection of pumpkins and gourds in the region. They also sell locally-sourced honey and maple syrup, a limited amount of baked goods, and a limited amount of produce which is grown by other local farmers that they themselves might not grow on their farm (e.g. kale) but they wish to make available to their customers. Stroud Farms has a secondary store located right on their corn field on Kingston Road/Highway 2 in Ajax.

Their website can be found here:  www.stroudfarms.ca . During the season, Stroud Farms is my every day farmer’s market!

The other local farm that I want to call out as a local food hero is Willowtree Farm. They are located a little bit north of the Southwest Durham area, just outside of Port Perry (about a half hour north of Ajax). Like Stroud Farms, Willowtree Farm has its store located right on the farm itself. They differ because Willowtree Farm also raises organic, hormone-free beef, and offers it for sale at their store. The Willowtree Farm store also has a working beehive in its walls, which you can see when you visit.

Willowtree Farm also offers pick-your-own berry fields and a delivery service within Durham Region of a weekly basket of fresh, farm-raised meat and farm-grown produce to be delivered to your door. This delivery-to-door is known as a Community Supported Agriculture (CSA) program.  Willowtree Farm also offers a variety of rare and unusual produce grown locally that you might not see in other farm markets, all gathered from nearby farms if not grown at Willowtree itself.

The Willowtree Farms website can be found here: www.willowtreefarm.ca . I can verify that their natural angus beef is some of the best beef I have eaten in my life (and I’ve eaten a lot of beef, even in Alberta! (sorry Valerie)).

In among all of the land of Durham, and elsewhere, being taken over by housing development after housing development, and shopping centre after shopping centre, local farms and farmers are my Canadian food heroes. They are visible within the community, giving consumers an affordable, healthy, and local choice of food purchases. Customers and consumers can ask the farmers questions about how the food was raised, the growing conditions, or any other concerns they may have. And their food simply tastes better. Without the need for salt.