Hello world! It's been quite a while since I've been here. I would apologize, but life just seems to get in the way of things. Except when it comes to two things - bacon and cheesecake.

Honestly, I am not the biggest cheesecake fan. I really find it a rather bland dessert. But, much like sweet cream ice cream, the humble plain New York or Philly-style cheesecake can be a base to lead you to somewhere beyond the dessert universe.

And yet, I have many friends who would walk over their mothers for a good cheesecake. And who wouldn't hesitate to sell out their country's innermost secrets for bacon...mmmm...bacon.

A while ago I made bacon and eggs ice cream. It sounded intriguing. And the Bacon Master of the house, my son, couldn't get enough of it, and neither could his bacon-loving male relatives. 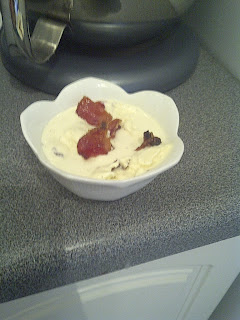 So I made a promise to my bacon-loving friend. As he and his lovely wife were looking for a house this past March, I said that when they bought a house, my housewarming gift to them would be a bacon and eggs cheesecake.

Well, they bought a house. They moved in June. They scheduled their housewarming for August. (Note to self: schedule a housewarming for myself sometime before I move.) So I had to think of a bacon and eggs cheesecake recipe, since, if you google it, well, that's probably how you happened upon this blog.

Unfortunately, they scheduled their housewarming on the day of my friend's 40th birthday. She is Irish. Her husband is Irish. They had an unlimited bar. Dilemma.

I had already committed to make the bacon and eggs cheesecake, and my soon-to-be 40something friend liked the sound of that as well. But I still wasn't sure how this was going to work.

You see, the caf at work (and if anyone from work is reading this, please don't run from the cheesecake recipe) has a breakfast special every Monday of toasted bagel with bacon and cream cheese. And it is fan-fucking-tastic.   I have been eating that every Monday for 6 years, save the 6 months during my pregnancy where I had to forego bacon because it was a cured meat.

So if bacon and cream cheese worked, and bacon and eggs made wonderful ice cream, surely this cheesecake could not fail. 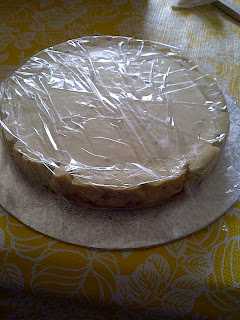 See for yourself. Here's the recipe:

3 pkgs of cream cheese (full-fat - using half-fat is like having a Big Mac with a Diet Coke) (use Lactancia cream cheese if you can find it, since it's the best for baking)

First things first - you need to make caramelized bacon. WARNING: this is like opening a crack lab in your house. It may sound repulsive, but once you try the end product, you will want to do nothing else for the rest of your days except make and eat caramelized (aka candied) bacon. You will yell at the oven to cook it faster. You will burn your tongue on melted sugar and bacon fat. You must summon all your willpower and ensure that you can make this without eating it.

Bake the pieces until the sugar has melted and the bacon is cooked, about 12 - 15 minutes, depending on thickness. Keep an eye out for burning sugar mixed with burning fat. You may have to change pans part way through, or open all the windows (and let your neighbours know what's going on? Never!). Once the bacon is done, take it out of the oven and let it cool completely until it is crispy and crackly (no pun intended). Put it aside. 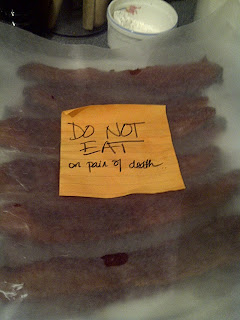 Yes, you will have to put a big sign on it. Maybe hire some Vegan Security Guards to stand next to the plate while you make the rest of your cheesecake.

While you're baking your graham crust, take your crack, er, caramelized bacon, and cut it into teeny tiny little bits. Use a chef's knife (the heavy blade that looks like a full triangle), pile about four pieces on top of each other, and cut them in 1/8" strips following the short side. Then, cut these pieces in half along the length of the bacon (so that you have teeny bacon squares). Try to get them as small as possible. You're going for the artificial bacon bit look, not the breakfast strip bacon look.

Following the cheesecake method for the pumpkin cheesecake (using all white sugar for our recipe here), mix all ingredients together, but instead of adding spices and pumpkin flesh, you add the bacon bits just before you pour the mix into the springforms. How much bacon? Add by the handful and keep your eye on the mix - you can't really put too much, but remember, it's supposed to be bacon AND eggs cheesecake. Stir the bits in gently, until they look evenly distributed.

Bake following the pumpkin cheesecake method, but reduce the time to about 35 - 45 min. Check the cake after 30 min - jiggle it ever so slightly. If it runs like you just put it in, leave it for another 15 min. If it jiggles like cafeteria jello, then turn your oven off and leave the cake in with the oven door open until it can be removed without mitts.

WARNING: Your cake WILL crack a bit around the bacon bit pieces, like this: 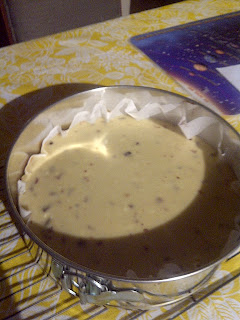 It's OK. If you've allowed it to cool in the oven, then the little cracks won't develop into big ones.

Let me know how you like this one. I thought it was so nice that I made it twice that weekend. Once for my friends and once for me.

But what about your 40-something friend, you ask? Didn't you say this was a TRIFECTA cheesecake weekend?

Well I made her something special. REALLY special!!....(to be continued).
Posted by Mimi at 7:41 PM