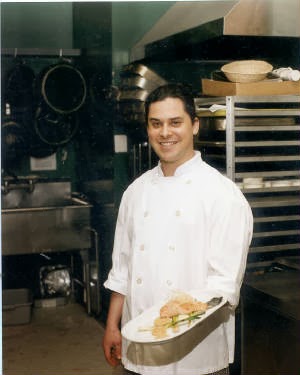 My late husband, Paul Mesbur, was a very talented young chef. He stagiared under Jamie Kennedy at Palmerston, and under Michael Stadtlander in the early days of Eiginsinn Farm. Among the other culinary skills he learned from Michael, he helped Michael plant the trees that line the drive up to the house.
Paul and I ended up together because of food. We were both attending a martial arts school, where they had decided to hold an end-of-year potluck to celebrate the achievement of the students. I signed up to bring tabbouli because, at the time, I was a vegetarian. He signed up to bring a chocolate cheesecake. I asked him where he was going to buy it. He said he was going to make it. I had my doubts. Sure enough, he brought a chocolate cheesecake in a baker’s box. I asked him again where he bought it. He told me he had his own baking business, and emphasized that he made it. He made me try a piece – a key part of this story is that I have always hated cheesecake – and when I tasted it, I asked him if he used French chocolate. He was impressed that I could taste the type of chocolate that he had used, and asked me how I knew. I said, “Because if you had used Belgian chocolate I might have had an orgasm here at the table. But it was only French, so it was okay.”


It was love from that moment on.
Paul was heading off to the Stratford Chefs School soon after that potluck. For two years I travelled the VIA line from Toronto to Stratford in the winter to visit him, discover what he was learning, be his guinea pig, all the while, slowly, Paul brought me back to the dark side of the omnivore world. Thanks to Paul, I went from a near-vegan to a woman who likes her steaks black and blue.


While at Stratford,  the students were given a project to design their own restaurants from layout to menu. Paul came up with the name Cinnabar, after a colour of a specific kind of clay he wanted to use for the centrepiece bar - clay being the raw material that is crafted to create something exquisite, much like food itself. The name stuck, and his side business, which became our full-time catering business, was called Cinnabar Culinary Delights.
After Stratford, Paul worked in the kitchens of Bistro 990, All the Best Fine Foods, and at Jamie Kennedy’s kitchens once again, before operating Cinnabar full-time. I was the wine consultant at Cinnabar, having studied at Stratford and the LCBO, and together, we were doing in-home cooking classes and customized catered events in the GTA during the early days of Toronto’s emerging gastronomical revolution.


Paul was the one who showed me that I had a palate, which led me to the study of wines, and food and wine pairings. He showed me how to find the balance in flavours of a meal. He had a delicate touch with food – nothing was ever over- or under-seasoned, and his plates looked like little jeweled treasures.
When he passed away, suddenly, after a short-term illness, at the young age of 34, I tried to put together all of his original recipes scrawled down on scraps of paper. I tried to remember which of the 3 shortbread cookie recipes he said was easiest, which one was the best, and which one to never use. In spite of all I found written down, some of his recipes remained in his head, and left the earth with him. One was his divine chicken liver pate, which he would make for me often and frequently. Another was a succulent corned beef he would cure from a raw brisket every year for his best friend Michael in time for St. Patrick’s Day.


I collected  all I could find put the recipes into a binder. Some of the recipes I tried were quite successful – the pumpkin pie recipe is now a Thanksgiving tradition in my home – and others I have been unable to replicate – the Chocolate Commitment Cake, for one. It’s a flourless chocolate torte. Simple for some, but there was something he would do with this cake that made it transcend any other flourless chocolate cake you may have had in your life. It was the most requested dessert at Cinnabar, and young men often proposed to their girlfriends after it had been served, hence the name. So here is the recipe for you. I make no guarantees about how it will turn out or whether you’ll receive a proposal because of this cake. I just know that I don’t have the delicate touch that Paul had to make this a work of food art. But when it does turn out, it transcends food heaven.


Melt together chocolate and butter. Stir in raspberry if using. Heat eggs until just warm over water, then beat off heat until soft peaks form. Fold into chocolate in two batches. Pour into an 8” springform pan, greased and lined with parchment, bottom wrapped in foil, and place in water bath. Cover with foil and bake at 425 for 5 minutes, remove foil and bake 10 minutes more. Cool on rack, then cover and refrigerate at least 3 hours before unmoulding.


Paul  started my love affair with Canadian food. It was something I took for granted, growing up near Bradford, but he showed me the unique things we were able to find in southern Ontario.  At Eiginsinn Farm, Michael Stadtlander taught him (and the other young chefs) what “local product” really meant. Paul took that to heart, and, wherever and whenever possible, he always utilized the best local produce he could find in everything he prepared for our clients. He showed me many of the wonderful things that were available to us locally – from morels to local meats to Cookstown Greens.

Paul passed away on February 20, 2005, so it seems fitting that this topic came up for me for this month. Every time I set foot in the kitchen, whether it's to make something simple like scrambled eggs or something complex like a turducken, I hear his voice in my ear, guiding me when I have my doubts or lose my way, and encouraging me when I believe all of my dish's flavours have been married in harmony. I miss him every single day that I turn on a stove. And I thank him for leaving me with this great love and reverence I have for our Canadian food landscape. I just wish he was still here to see how far his dreams have come since he left us nine years ago.
Posted by Mimi at 4:50 PM