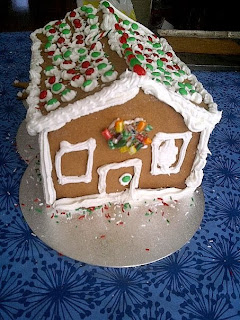 I was born in Scarborough, Ontario, and was raised Catholic – at least until my father discovered that he could talk to God on the golf course on Sundays – so Christmas always meant snow, no school, and lots of cooking. In Trinidad – where my parents are from as you may recall – food is paramount to every celebration, especially to Christmas and Easter.
My mother was raised Muslim – she converted later, but that’s another story – so our family Christmas traditions came from my father. When I was a kid, I always thought that the cooking took place over several days. It wasn’t until I left home that I realised that it was the torture of sleep-deprivation that kept me believing the cooking was a seven-day non-stop extravaganza. All of the cooking actually took place within 36 hours.
We would start on Christmas Eve afternoon with the ham. This is not your honey-glazed baked ham. This was a nice bone of ham, which you can now buy at any self-respecting West Indian grocery store starting after December 15th each year, but when I was a kid, we got a smoked picnic shoulder ham from Dominion. To this day, even though I know in the depths of my heritage, I should be going to the West Indian shops and buying a nice, hung ham, I still go to the grocery and get a water-chilled, vacuum-packed smoked picnic shoulder ham.
We put the ham to boil in plain water for about 2 hours. It’s supposed to get most of the salt out, and it’s also supposed to cook the ham. While the ham is boiling, we make the dough.
Dough? Dough, you say? What do you mean dough?
Well, here is the secret of the world-famous Trinidadian-style Christmas ham. Every Christian family in Trinidad has their way of preparing the ham and preparing the dough. Then you wrap the ham in the dough, and bake it until the dough is golden brown. And when I say “wrap”, I mean like the ham is a Christmas gift and the dough is the wrapping paper.
There is nothing that tastes better on Christmas Eve, and leftover on Christmas Day breakfast, than ham in dough. To me, ham in dough is Christmas. Even when I was a vegetarian for six years, I would sneak pieces of dough that weren’t too close to the meat.

After the ham and dough were done, and we were busy having pieces as snacks, we would then roast chestnuts for our stuffing. This is not a Trinidad tradition. This is an Italian tradition that my father picked up from his Italian co-workers (and mistress, but again, that’s another story). My father believed the only way to prepare chestnuts was to roast them in the oven in foil and then, when they split, peel them and use the nut meat for the stuffing. I cannot tell you how many Christmas Eves I spent as a teenager (probably all seven of them) slumped over the kitchen table at midnight, with A Christmas Carol starring Alistair Sim on the TV, holding a paring knife, cutting into each chestnut by the split seam, peeling the wooden skins, getting splinters under my fingernails, just for a few tiny pieces of precious, golden chestnut. Just thinking about it right now makes my fingertips hurt as I type!

The next morning, my mother would use the chestnuts in her famous chestnut stuffing, which would be roasted inside the duck we would have for Christmas dinner. My mother is allergic to turkey, so we never had turkey at any celebration. We would usually have duck instead, since I grew up in Newmarket which was close to the King Cole duck farm.

My mother would also make Christmas sweet bread, which is not black cake or West Indian fruitcake. Sweet bread, not to be mistaken for sweetbreads, is a coconut bread, which may contain raisins, though mine never does, which has a crust of sugar on top. But overall, we didn’t do a lot of cookie baking for Christmas. Dessert was either sweet bread or something my mother would whip up. Dessert was always secondary to the food.

In my own house now, I make the ham in dough. I buy vacuum-packed chestnuts – sorry, dad – and chop them in the food processor to make my mother’s chestnut stuffing. And I bake all sorts of cookies and cakes for dessert, along with the raisin-free coconut sweet bread.

Much like the Christmas I grew up with, my Christmas is even more multicultural, including things from cultures that aren’t even part of our family. Last year, I went insane and made duckenhen  - duck, chicken, and Cornish hen – with chestnut stuffing instead of Andouille sausage stuffing. 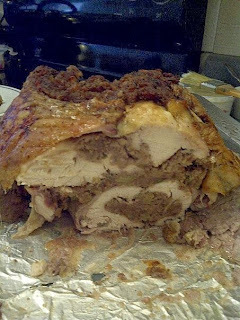 I made a batch of pepparkakor from scratch. 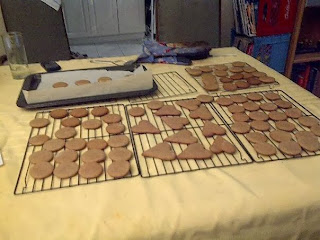 I much prefer the Swedish ginger cookies from any other gingerbread cookie recipe out there. And, from my late husband’s family’s tradition, I made mund cookies from scratch. I also made Gordon Ramsay’s cranberry sauce which is simply to. Die. For. And yes, I made Gordon Ramsay’s shortbread. If anyone knows shortbread, it’s going to be a Scottish chef with anger issues.
Christmas is about the old and the new. As long as I’m alive, there will be a ham in dough on the table on Christmas Eve. And there will be chestnuts in some form. But we will keep adding items to that table, creating new traditions along the way.


If you’re still curious about this whole ham in dough thing, here you go. But don’t say I didn’t warn you – once you try some, you will want to keep the entire package to yourself!


Trinidad-style Christmas Ham
1 – bone-in ham, min. 7 lbs, max. to whatever can fit in your largest pot and oven.


If your ham comes wrapped in plastic wrap, remove it, but leave any mesh netting the ham may come in on the ham to keep it intact while boiling.


Place the ham in a pot deep enough to hold the ham submerged in water. Fill the pot with water to cover the ham as much as possible. Place the pot with the ham on the stove and bring to a boil. Keep the ham going at a lively boil without spilling too much water out of the pot. If the water is bubbling over, then turn down the stove until the water is bubbling but not boiling over. Cook the ham, uncovered if at all possible, for 2 hours minimum.


To make the dough: in a large bowl, measure and sift/whisk together flour, baking powder, and salt. Then take half of the softened butter and rub it into the flour mixture with your hands until the whole thing has the consistency of cornmeal. Add the water, ¼ cup at a time, to the cornmeal-like flour mixture until the dough is gathered into a smooth ball. Knead well, and leave in the bowl in a warm area of the kitchen with a damp dry towel over the top for about 35 – 45 min. It can stay for up to an hour if your ham needs more time to cook.


Ham will be ready when it starts to look flaky and feel springy to the touch. Remove from heat; drain. You can leave the ham in a colander or whatever you used to drain the ham (if in the pot, leave the ham in the pot but do not put back on the stove dry).

While the ham is draining and cooling off, preheat your oven to 350F. Turn your dough out of the bowl and onto a well-floured surface. Roll out until the dough is about 1/3” thick. Take the ham out of the mesh netting, if it had one, put it in the centre of the dough, and wrap the dough around the ham making sure to cover all surfaces of the ham. Put the ham, seam-side down, onto a baking tray lined with parchment or silicone. Take the rest of the softened butter and rub it on the outside of the dough until the dough is well-greased.

Put the ham in the oven and bake until the dough is deep golden brown. Depending on the size of your ham and how hot it was when it went into the dough, this could take from 35 – 60 minutes. If the dough appears to be drying out, you can re-baste it with any remaining butter you might have on the counter.


Once the dough is golden, remove the ham from the oven. Try to resist the urge to tear into it right away, but if you do, be careful of the steam that will come out of the dough when you first cut into it. Dough may be torn off the ham by hand as well.


If you do have any ham left over, be sure to pierce it with cloves all over before storing it away overnight. But don’t bake it with the cloves in it. The dough will not be as tasty.