October 7, 2013: Preserving: Our Canadian Food Tradition or How I Learned to Stop Fretting and Love the Jam


The Canadian Food Experience Project began June 7 2013. As we (participants) share our collective stories across the vastness of our Canadian landscape through our regional food experiences, we hope to bring global clarity to our Canadian culinary identity through the cadence of our concerted Canadian voice. Please join us. 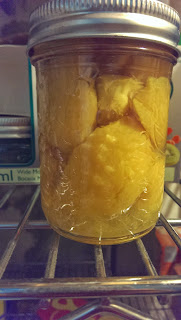 Let me start this off by saying I am one of those rare people who hates preserved food. I don’t like jams, jellies (except mint jelly on lamb), dried fruit, pickled things…I like food to be as fresh as it can be. I’m not sure why.
To be honest, I’ve never really heard about Americans or other nations home canning or making jams as much as we do in Canada. In Canada, we talk about someone’s mom or grandma making jam at home with the same ease as we talk about them making pancakes for Sunday breakfast.


As I’ve mentioned previously, my parents came to Canada from Trinidad. The methods of preserving in hot climates vastly differ from cold climates. In Trinidad, fruits and nuts are preserved by leaving them to dry outside in the sun, or in a shack in the backyard.  The only things that people “can” are chutneys (which are very different from Canadian chutneys) and “pepper sauce”, which is basically a savoury chutney-style sauce made out of various types of hot peppers and other ingredients. Every family has their own recipe.  Pepper sauce is not heat sealed or canned since it never lasts longer than a week or two on most people’s tables, and is usually stored in some type of recycled container, like an old mustard bottle.
My mother was born during WW2, when canned food first became a necessity in the Northern hemisphere, and brought by soldiers to the bases on the Caribbean islands. Foods such as corned beef, tinned soups, and canned milks were then integrated into local cooking on the Islands, becoming staples of everyday meals.


But when my mother came to Canada, for the first time, she saw people make their own preserves. The woman she boarded with made her own pickles. When my father started working as an accountant in an office in Weston, Ontario, the Italian workers would bring in jars of tomato sauce that they had made at home to share with others. And when we moved to the small town of Newmarket, Ontario, our neighbours made fruit chutneys and canned their own fruit (though using this term confused me for years when I was young. I expected people to put things inside of tins, not glass jars!).
Watching all of our neighbours making their own preserves inspired my mother to buy a bunch of fruit from Niagara and start canning things herself. She made about 100,000 jars of canned peaches one year. Another year, she canned her own tomatoes after we had a bounty in the back yard.  I remember she also made dill pickles (after we grew dill one year in the garden),  as well as trying her hand at jams and jellies. The problem was, she was making them all thinking that I would like this because, well, we were in Canada now and this was Canadian food for her Canadian daughter.


Being surrounded by endless jars of the fruit of my mother’s labours most likely contributed to my disdain for preserved goods.  But I’ve never really liked the taste of them.
I never had an interest in continuing my mother’s misplaced traditions until I had a son of my own, and we moved out to the Green Belt. The spring and fall we get out here are the sweetest berries on earth, and there’s only so much room you can make in your freezer for them. Besides, frozen berries are really only good for making sauces, ice creams, or throwing into punches as alternatives to ice cubes. And so I pulled out the books that my mother gave me to attempt to make jams.


The one thing I have decided, though, is that additional pectin is just sinful in jam. I understand the need for it in jelly, because you are straining out all of the pulpy goodness and natural pectin in the fruit to give yourself a crystal-clear substance. But why add something to jam that is already there? So all of the jams I have ever made were crafted without additional pectin. I let the natural pectin in the strawberries, raspberries, and blueberries shine through.
(I did make mint jelly using the mint from my backyard, and there I was forced to use ready-made pectin, since mint does not have any natural pectin.)
My recipes are simple – fruit, sugar, lemon juice. Cook until done. (I use the spoon in the freezer trick.) Pour into a jar, and seal. I try to leave the berries as large as I can – I mash them, but I like to see big pieces of fruit in my jam, even though I still won’t eat them. 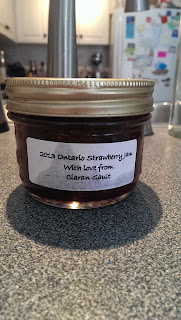 
I think that’s what we all do these days – most people who preserve end up trying to make a business of selling their things or they give them away as gifts – it’s very rare in the urban areas of the country to see people who stock their pantries with their own home canned goods to use them through the winter anymore, even though they’re happy to purchase home canned goods made by country and city chefs alike.
If you’ve never tried to make your own preserves, it’s quite easy. Don’t be intimidated by the sterilization process – it’s easy to do these days if you have a dishwasher and an oven!  So let’s keep up the Canadian tradition of home preserving and canning. We have the perfect bounty for it, we should count (and can) our blessings!

For every 2 1/4 cups of berries, add 1 cup of white sugar and 1 tsp of lemon juice. Wash and hull berries (with a knife - no need to use a fancy huller!) and throw them into a large pot. I use a stock pot. Add the sugar and lemon juice, then place on the stove over medium heat to heat up. Mash berries using a hand potato masher. You can crush them to a pulp or you can leave them depending on how whole you like your strawberries in jam. Once the jam starts to bubble and boil, start skimming any bubbles that come to the top off. You may end up with about a cup of bubble liquid for every 12 cups of berries you use. When you see the jam start to give off fewer bubbles and thicken up, put a metal spoon on a plate and put these in your freezer for about 5 - 7 min. Using dry hands take the spoon out and dip it into the thickened jam. Drop some on the plate, and if it comes to just about the thickness you like your jam to be, turn off the pot, and get ready to start pouring it into jars. If the jam isn't as thick as you'd like it, leave it on the stove, wash the spoon and plate, dry them thoroughly, and put them back in the freezer for another 10 min. Keep repeating the check until desired consistency is reached.